Resources Guides How to Activate an AGM Battery

Yuasa AGM Batteries leave the factory in one of two ways: Factory Activated (FA) or Bottle Supplied (BS). Activating an AGM battery is overall very easy and differs from activating a Conventional battery. In this article, you will learn about Yuasa’s AGM Batteries and how to properly activate them in an easy 7-step process.

How Batteries Leave the Factory

Yuasa Absorbent Glass Mat (AGM) Batteries leave the factory either Factory Activated or Bottle Supplied. It’s important to know the difference between the two states and what it means for your Yuasa Battery:

Activating an AGM battery (BS) is simple and differs from the activation of a Conventional battery. Non-activated AGM batteries can be stored for long periods of time as long as they are kept in a cool, dry place and out of direct sunlight. One should never remove the foil sealing strip covering the filler ports until the battery is ready to be activated. Do not use anything but the electrolyte container that comes with the battery for filling the cells as it is a higher concentration of sulfuric acid than that used in Conventional batteries. It’s also important to note that not all electrolyte containers are created equal. Typically, each container has the proper amount of electrolyte for its specific battery. Always read the precautions and instructions on the electrolyte container before handling and filling your battery. Do not smoke when activating a battery or handling battery acid. Always wear plastic gloves and protective eye wear. 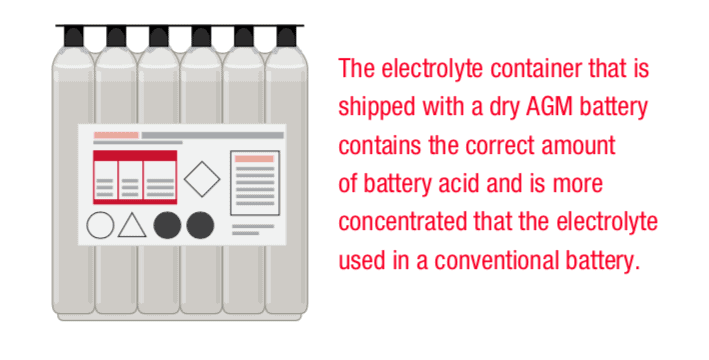 The 7-Step Process to Activate an AGM Battery

Activating a Yuasa AGM Battery is a simple, 7-step process that nearly any rider or mechanic can follow with success. Remember to always practice caution when handling batteries and activation equipment.